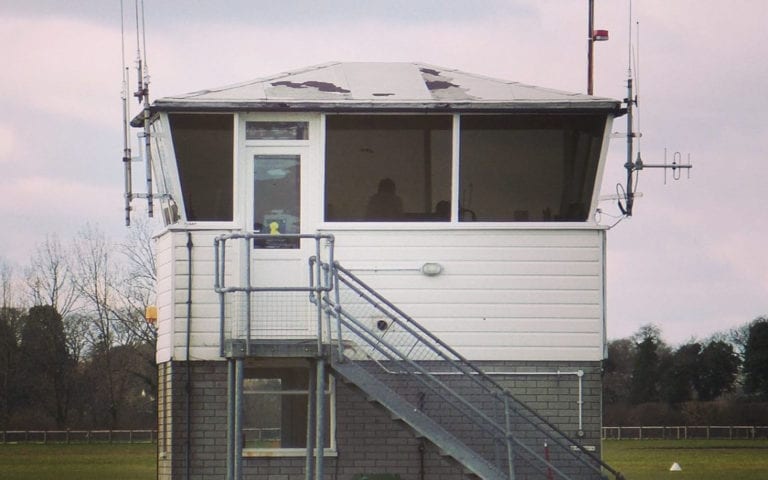 My very first contact with the tower happened on the second day. During Startup Check, it reached that time when we needed to contact the tower and my instructor asks me if I feel ok to call the tower. I have heard this message twice now and think, “give it a try – the sooner the better.”

We rehearse it first, more than once. Then, sitting there like a virgin and concentrating for a few seconds, I pull the trigger and start talking – slowly & very clearly. The message passes like butter –  the ice is broken, I think.

But then, the other side fires back at rocket gun speed & in a very strong British accent!

It is so absurd that I really start to laugh. The instructor completes the radio call but he can’t stop smiling either and looks at me: “Well now, you got a hard one, really. They are not all the same. Perhaps he is just new.”

I can’t believe what just happened, can’t stop laughing and tell him, “This felt like being in that famous Japanese hidden camera TV-Show! Where is the camera?”

The broken ice just turned into an iceberg within one single message.

My instructor constantly repeats that I have to anticipate what they will say – it’s always the same and in the same order. Even though I know what to expect, it’s just not much of a help if I don’t understand a single word. Also, it’s sometimes acoustically difficult.

After the glorious start on my first ever radio talk, I was convinced that this radio problem was simply a non-native English, plus British, pronunciations kind of problem.

I mean, if someone talks to me in Swiss-German, German or French, I could immediately understand every single and slight nuance at whatever speed, react and, afterwards, I could even guess where he comes from.

But, some days later, another student who started training one or two weeks after me, a British guy, asked me how I overcame the beginner’s problems with the radio.

So he had the same problem? Well, probably not the same, but he didn’t catch it straight away either.

At the end of the day, it’s really not many terms (perhaps 20 or 40), it is always more or less in the same order and is really not that difficult. But, it takes more time to get used to than I expected.

And the real challenge is only just beginning. Combining the first radio talk, whilst hovering, is an interesting moment of self-experience of what the brain does when working at its limit.

The potential for distraction is immense.

Somehow, balancing in hover and telling the tower the simple phrase of just – 5 words! – “Ready to departure from Triangle” – was enough to almost unbalance my hover.

Afterward, I even asked my instructor if you could first land on the ground before talking. Of course, this makes absolutely no sense and, as I found out later, the final landing itself was the bigger issue anyway.

The ability to listen, talk, and fly is an ongoing challenge through the different stages.

During my first solo navigation flight, where I had to switch the frequency and talk to someone else at some point, I managed to climb 300 feet whilst listening. Then, I had to set the pressure setting and transponder code he just gave me and climbed another 300 feet only to realize that apparently, I had managed to get the transponder code wrong. It is only 4 digits!

Black-Box  – Humans on a daily mood?

Starting to use the radio became a journey of its own. It was not a constant problem, it was an up and down through the different steps. Sometimes, I could not understand anything and then the next time it was a piece of cake. In some situations I got it from the beginning and, in others, it distracted me so much I was almost unable to fly any more.

However, it started to be a running joke – how was the Black-Box today?

In the beginning, I was really confused: I am fluent in 4 languages, talking played a major part in my former profession (hundreds of technical terms), I regularly performed on stage in front of more than 1,000 people, and now, I am hard pushed to stumble through 3 half-sentences of 4 words each!?

90% of the problem is your own brain – it has to puzzle together “listening, understanding, talking and flying”. Exactly this feeling repeats itself through all the different stages. It usually starts with a quick shock, starts to get familiar but is really difficult to handle, and finally, it works.

It is one of those times during training when I had to always remind myself: “It’s the same for pilots as it is for musicians. The masters did not usually fall from the sky. They trained and trained.”

Some weeks after my very first talk, I met this guy outside the tower. It was somehow a relief that, even here, I did not understand him very well. He had a really weird accent and talked extremely quickly.

The magical sound of the radio – Up in the Sky

I had always loved this magical sound of pilots talking on the radio. My first visit to the cockpit of an airliner took place when I was 8 years old. The only language I talked at that time was French. It was on the approach to Geneva Airport at night.

It was a really long time ago, and obviously, I did not understand anything, but I can still remember it very clearly:

“Just the sound. The ambiance. Different voices.”  I can not really describe it but magical is sure close to it, that’s for sure.

During my PPL(H) training, the radio was often more of a hassle than a pleasure. But this magical feeling of cruising around in the sky to the sounds of the radio, towers and other pilots was always there.

Even better, is the feeling of starting to become part of it.